He sees the bike and the name Gladiator and looks upwards where his computer is still playing on a shelf on the back wall. He disentangles the bike then throws a leg over the frame then slowly puts both hands on the bars. As he does so one of the boxes bursts open and a man clambers out. He is dressed in shorts and vest and looks for all the world like ART except he is covered in a hundred years of Dust
CHOPPYWhat have you done to the Gladiator?
JIMMYYou’ve just got out of a box.
CHOPPYAnd not a moment too soon. That is a case of serious neglect.
JIMMYWhy are you in a box?
CHOPPYA miscarriage of justice that’s why. Choppy Warburton in a box marked scandal.
JIMMYWhat are you on about and what the hell have you been doing in that box?
CHOPPYMore to the point, young man, is what I’m going to do now I’m out of the box.
JIMMYCan you stop being weird please, I’m the one who does weird in this house.
CHOPPYAnd you’re sitting on the Gladiator.
JIMMYYeh, I am, and what’s it to you, you shouldn’t even be here. Especially not in a box you big perv.
CHOPPYNo. But what am I doing here? And what are you doing here?
They both look up
JIMMYIt wasn’t my fault.
CHOPPYYou’re right. It was never your fault. Let no man ever say it was Arthur Linton’s fault.
JIMMYWho’s Arthur Linton.
CHOPPYNot you. Definitely not you. So what am I doing here with this scrap of nothingness?
JIMMYWhat are you talking about? Who are you talking about?
CHOPPYI’m talking about cylcling champions of the world, Jimmy Michael Tommy Linton and greatest of them all Arthur Linton,cyclists non pareil and Aberman’s finest.
JIMMYAberaman doesn’t have any world champions.
CHOPPYThey did have.. Eighteen ninety five they broke every record in the book and a year later Arthur captured the blue riband and won the Bordeaux to Paris cycle race. The greatest bike race in the world – before The Tour De France before the Olympics, there was the Bordeaus to Paris and it was won by a Welshman - Arthur Linton – are you Welsh?
JIMMYSort of – sort of welsh gladiator.
CHOPPYI like the way you talk but that, my friend, is the Gladiator, finest piece of engineering of its era, pride of France and symbol of La Belle Epoque.
JIMMY What exactly have you been up to in that box?
CHOPPYWill you stop talking about the damn box! I’m talking about honour and dignity.
JIMMYHonour and dignity?
CHOPPYYes, my friend. Don’t you believe in the honour and dignity of man.
JIMMYYeh. Yeh I do.
CHOPPYThen perhaps you are the boy for me.
JIMMYBut I don’t know what they are.
CHOPPYPerhaps not. Cursed at every corner!
JIMMYYou are freaking me out now and I think you should definitely put some clothes on.
CHOPPYNo, no this must be right. This must be why I’m here. You, young man, are going to ride this bike for me.
JIMMYI don’t think so.
CHOPPYThat’s why you’re here, it must be.
JIMMYI’m here cos I fell through the ceiling and I’m not riding that bike because one, it’s a wreck and two - I can’t ride a bike.
CHOPPYStill the world laughs at me. Eighteen ninety five I was with the best bike riders in the world , now I’m with someone who needs stabilisers
JIMMYWill you stop pissing about, eighteen ninety – that’s a hundred years, you’d be – you’d be dead.
CHOPPYIf only I was. You’re a long time dead. You’re even longer defamed.
JIMMYWhy do you talk like that?
CHOPPYYears of bitterness, my friend, have left salt on my tongue. Which is nothing to what has assailed that bicycle. What the buggery have you done to it?
JIMMYAsk my father, this is all his stuff and he’s going to be well pissed. My mother’s not going to be too happy - jesus Christ, I’ve knocked her sodding wall down.
CHOPPYWe have had the same perilous descent to our destiny.
JIMMYI don’t think so. Look at me, I’ve just tried to crucify myself and ended up on my arse next to the Spice Girls.
CHOPPYYou tried to crucify yourself?
JIMMYNo. Course I didn’t. I don’t know why I said it. What sort of idiot would do that?
CHOPPYSomeone with an unquenchable appetite for suffering.
JIMMYThat’s not me.
CHOPPYAnd it wasn’t me. I never tried to crucify anyone. Never! But Arthur linton –
JIMMYHe tried to crucify himself?
CHOPPYHe would do anything – anything for honour and dignity. But still they pointed the finger at Choppy Warburton.
JIMMYWhy? What did you do? ?
CHOPPYJimmy, my friend, you are going ride this bicycle from Bordeaux to Paris and I will recover my honour, you will achieve dignity and we will both reach our destiny.
JIMMYBrilliant.
CHOPPYYou don’t trust me do you?
JIMMYWhy should I ? You’re just some bloke who’s copped off with my mother and been caught doing iffy things in one of my dad’s boxes.
CHOPPYGet on the bike. 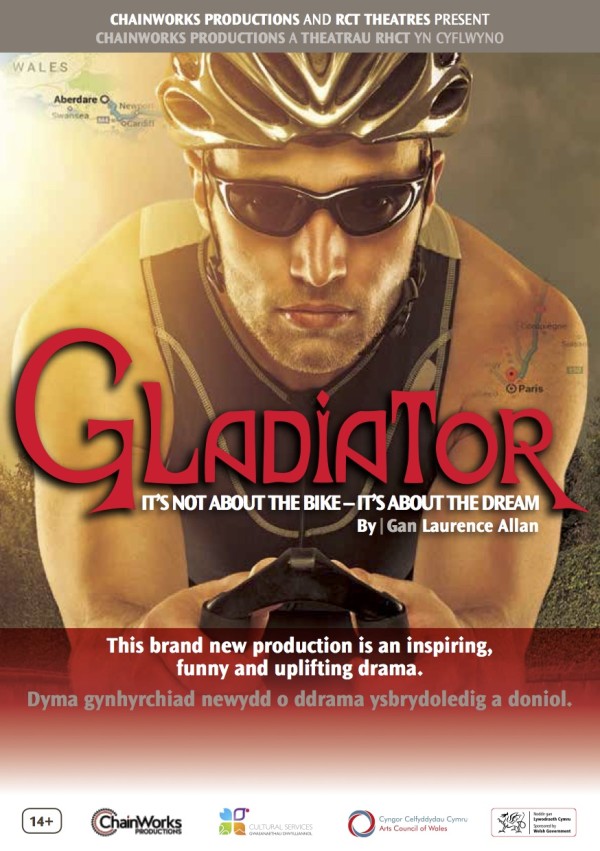 Laurence Allan knows that this coalfield has produced some of our greatest actors, singers, painters, writers and musicians. Its theatres, as much as its sporting and music venues, have been central in defining who we are as a people. Laurence Allan’s words and direction, projected by his extremely able cast and crew, push and probe at those definitions in ways that could be penned only by a writer whose powers of observation are as impressive as are his leg muscles as he cycles up and down the Valleys that made him.

Cyclists top the league table in sporting heroes, Mark Cavendish, Sir Bradley Wiggins and – Lance Armstrong, collectively symbolizing dedication and achievement and individually, speed, endurance and drugs. But for all this celebrity focus there is a Welsh World Champion who remains stubbornly out of the spotlight.

120 years ago, Arthur Linton, a young miner from Aberdare, symbolized the whole package of achievement including, sadly and disputably, drugs.

He was a world champion at 24 and dead at 27. He could sprint like a Welsh greyhound and grind out the miles like a gazelle on the Serengetti.  He took on all comers in the Valleys and Cardiif and whipped them soundly, humiliated everything England had to offer and then beat up the French and the Italians in their own backyard.

He did all of this not on a featherweight string of carbon but on a bombproof steel boneshaker of a bike weighing in at just under 10 kilo with one single 96 inch gear that a blacksmith would struggle to shift.

Perhaps the reason he is a forgotten hero is the accusation that he was a closet villain. Before EPO, doping and Lance Armstrong, in 1896, Arthur and his trainer Choppy Warburton were at the centre of the first drugs scandal. Two months after winning the epic Bordeaux to Paris bike race, Arthur had died.  Typhoid fever was the official cause, Except some people didn’t believe it. Why not? Perhaps some people just don’t want to believe things that appear just too good to be true.

This is a play about dreams and ambitions. And believing.

Rising mountains and fallen heroes. Just when your dreams are dashed by the greatest liar ever to ride a bike, you find another hero, another dream, right on your doorstep. In Aberdare. A hundred years ago Arthur Linton was cycling champion of the world. And rode a bike called GLADIATOR. Makes you want to ride up a mountain in body armour. Or write a play.

How? Many years ago, Spectacle Theatre Director, Steve Davis approached Larry with the idea of creating a play inspired by the little known Linton brothers, world cycling champions in the 1890’s who came from Aberdare. The Gladiator was a prototype for the first racing bike, designed in France.

Co-production with RCT Theatres, supported by Arts Council of Wales 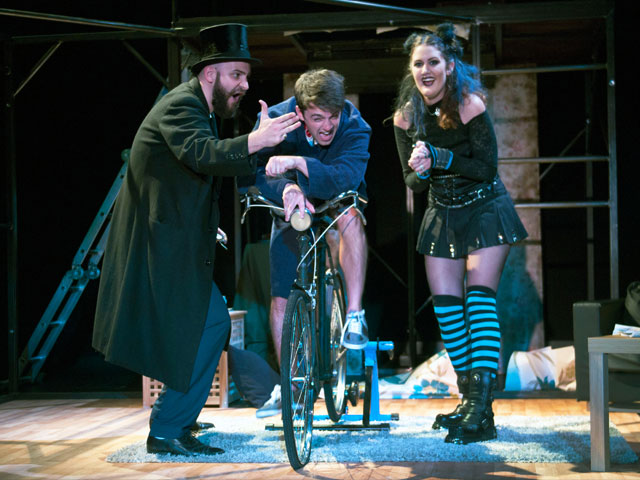 Choppy and the Goth girl 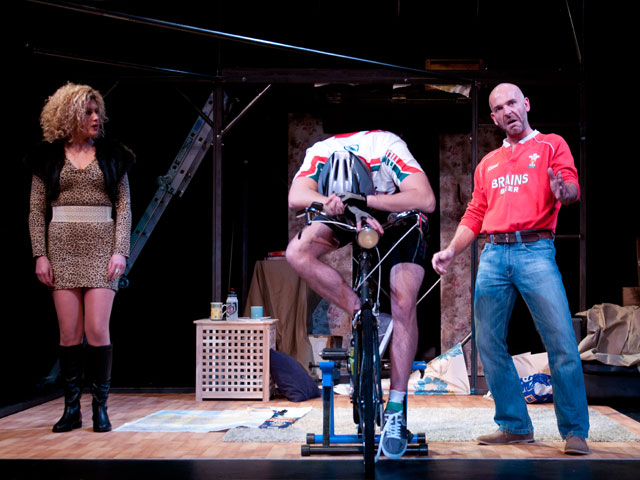 Asleep on the bike 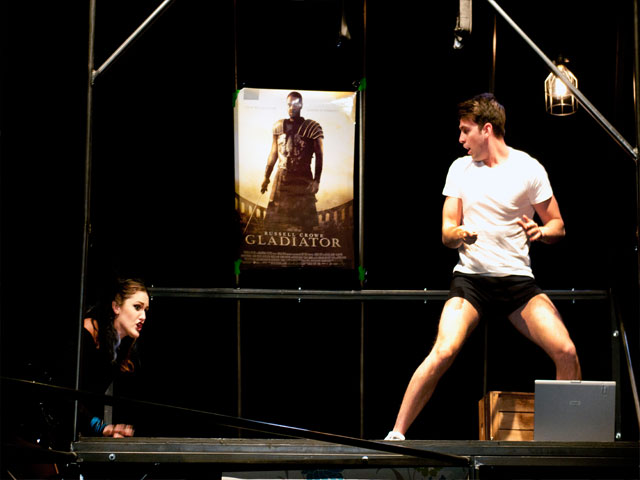