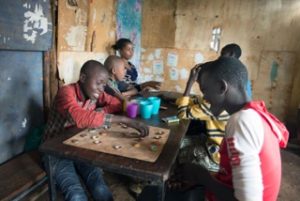 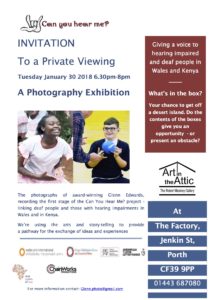 Our latest project takes us back to Africa, where the idea for Chainworks was forged during the  Mzansi Cymru collaboration. Among the many people we worked with in Wales and South Africa none have been more constant in our journey than Newport photo journalist Glenn Edwards. He made a beautiful and evocative photo recording of our TORCHBEARERS  adventure in South Africa and this time he spearheads the project CAN YOU HEAR ME?  in Kenya.

This has grown out of one of Glenn’s previous assignments in the Thika slum district of Nairobi and in particular the Kambui School for the Deaf. Here he came face to face with shocking evidence that there is still a widespread belief that witchcraft is still associated with deafness and parents and deaf children being ostracized and vilified because of their condition.

This was exemplified by the tragic and uplifting story of one boy at the school, John Chege, who after losing his hearing from meningitis as a baby, eventually turned  to a life on the streets as slum kid and was dependant on drugs and alcohol by the age of nine. Luckily he was found by charity workers from Life Skills Oasis and found a safe haven at Kambui school where he turned his life around and now is a member of the Kenya deaf football team.

Here was a story of obstacles and opportunities – familiar themes for all young people – but polarized if you are deaf or any way disabled. But how are they different in Wales and Africa? With the aid of  research and development grants from Hub Cymru Africa and Wales Arts International Glenn has been back to Kenya to work more closely with young people from Kambui School and Thika slum http://www.llanishen.cardiff.sch.ukproducing a short film with Kenyan film maker Joan Kabugu.

This will serve as a stimulus for young  students in Welsh schools to compare experiences and begin the exchange of stories between two  communities and two countries. Workshops at St, Cyres,  Penarth, Cwmbran High School – including the Deaf Choir, Llanishen High School and Valleys Kids will be led by Glenn himself and writer and director Laurence Allan and Radio Producer Steve Groves.

From here we hope that a richer journey starts leading to a more active collaboration across multiple genres of storytelling.

The production company of award-winning writer and director Laurence Allan